Yesterday, parliamentarians and NGOs from across the EU met in The Hague for the second event of the Parliamentarians Against Human Trafficking project.

The day started with a welcome address by Senator Willem Brocker, host of the event, and Anthony Steen, Chairman of the Human Trafficking Foundation. Both explained the importance of having independent National Rapporteurs across the EU to assist in the fight against trafficking. Senator Brocker also reflected on the Dutch Parliament’s good relationship with the Dutch Rapporteur and how the work of the Rapporteur had significantly informed and improved counter-trafficking debate in the Dutch Parliament.

Next followed keynote speeches by Corinne Dettmeijer-Vermeulen, National Rapporteur on Trafficking in Human Beings in the Netherlands, and Ard Van Der Steur MP, member of the Dutch Parliament.

Ms. Dettmeijer-Vermeulen described the work of the National Rapporteur in checking the effectiveness of the fight against human trafficking. She explained how the role continues to evolve with the addition of fighting child pornography to her mandate.

After a short lunch break, the afternoon kicked off with a lively interactive discussion on co-operation between NGOs and parliamentarians, chaired by Marieke Van Doorninck, La Strada International Netherlands and featuring contributions from Sandra Classen (BLINN), Bas De Visser (Comensha), Theo Noten (ECPAT Netherlands) and Jaana Kauppinen (Pro-Centre Finland). Debate centred on how MPs and NGOs could work together to convince colleagues of the importance of establishing an independent rapporteur in all EU member states.

The next event of the PAHT project is scheduled to take place in Rome on Thursday 22 March 2012. 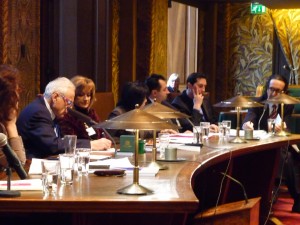